A successful team beats with one heart 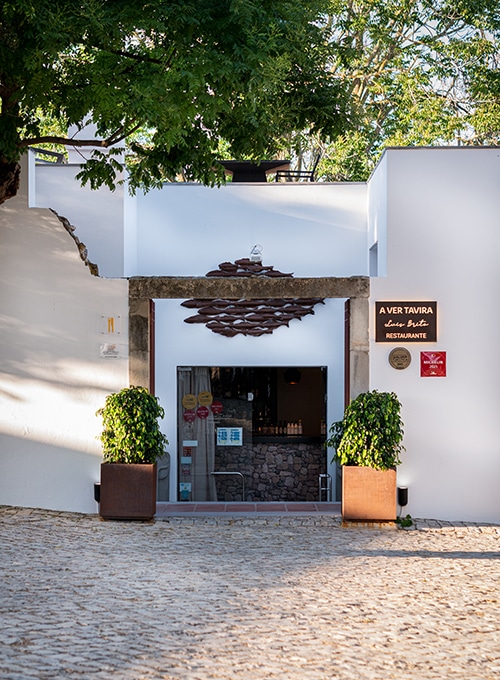 Inaugurated in 2006, it’s a true homage to the city of Tavira and the historic area’s magic of this region in the Algarve.

Chef Luís Brito seeks to claim in the Portuguese contemporary cuisine not only its roots, but also the acquired worldwide experiences, through his contact with people, cultures, colours, aromas and above all else the tastes… which are indelibly represented in his signature dishes.

The differentiating approach with which he has created the whole concept for the Restaurant “A Ver Tavira” is an appeal to the senses, a unique dining experience! 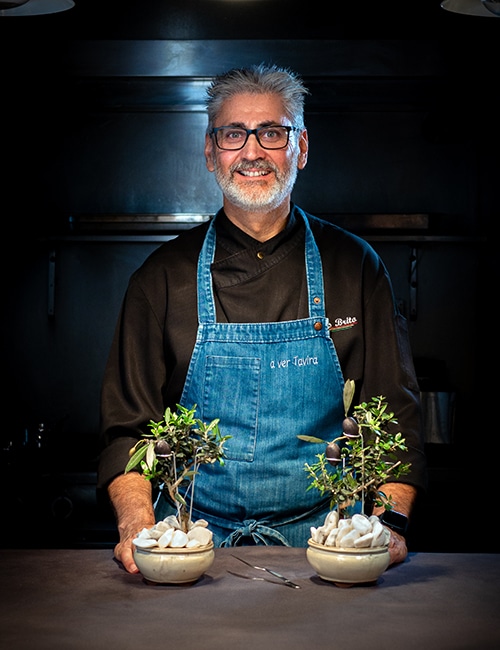 Born in Santa Clara-A-Nova (Almodôvar), Luís began his journey in the kitchen in 1989, when he joined the Faro School of Hospitality & Tourism, having graduated in Cooking & Pastry making. He began his professional journey as a cook working at various restaurants and hotels in the Algarve until he assumed the role of Executive Chef at the Hotel Alfamar, one of the biggest hotels in the Algarve at the time.
He has led the kitchens of various groups such as the Petchey, the Starwood and the CS Madeira Atlantic. In between, he frequented SENAC, Brazil’s School of Hospitality & Tourism in São Paulo, Faro’s School of Hospitality & Tourism and in Angola was Executive Chef at the Nempanzu Hotel.
His vast experience, complimented by a sharp emotional intelligence, has garnered him recognition and notoriety through his 30 year career, full of friendships and unique experiences.
Luís Brito has been a judge at various competitions in Portugal and abroad, as well as a guest speaker at the Congress of Cooks in 2006.
Today, leading his own project “A Ver Tavira”, he has conquered several distinctions, such as the TripAdvisor Certificate of Excellence in 2018 and recommendations on the Michelin Guide and the Boa Cama Boa Mesa guide in 2019 and 2021. 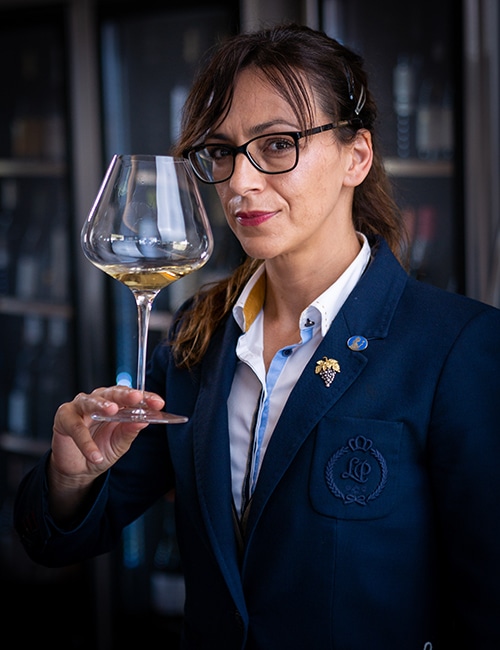 Born in Manteigas, Serra da Estrela (Guarda), Cláudia began her journey as a Waitress in 1990 when she joined the Pousadas de Portugal, passing through several restaurants and hotels in the region.
In 2004 she became a Food & Beverage Manager on the Princess Cruises Ships, one of the biggest challenges of her professional career, providing her with a professional tour throughout the world, where she experienced cultures, customs and created timeless bonds of friendship.
In Portugal, she has collaborated with Michelin star restaurants and at various hotels, namely, Hotel Bom Jesus de Braga, Sheraton Porto Hotel and Spa, the Pedro Lemos Restaurant in Porto, Casa de Chá do Boa Nova in Leça da Palmeira, DOP Porto and the Hotel Teatro Designer.
In the Algarve, she headed one of the restaurants at the Hotel Salgados Palace from “Grupo NAU”, worked at the Bela Vista Restaurant in the Hotel Bela Vista from the Relais & Châteaux brand, following onto the São Gabriel Restaurant in Quinta do Lago, Almancil.
Her passion for wine and wine pairing materialised during the sommelier course she took at the Faro School of Hospitality & Tourism, followed up with a level 2 WSET on wine knowledge. Her training culminates when she assumes the position of Maitre Sommelier at the Restaurant “A Ver Tavira”. 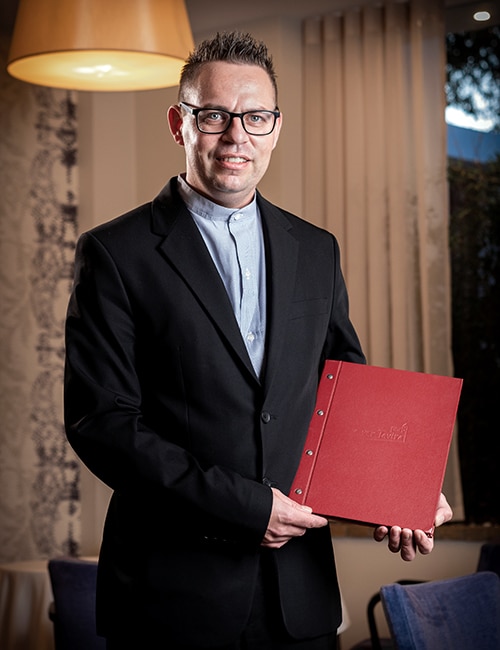 Born in Olhão, he emigrated early with his parents to Germany where he stayed until he was in his teenage. At the age of seventeen he started his professional career at the Marina Hotel in Vilamoura, rising to the position of Head Waiter at the age of 21 at the former Santa Maria Hotel in Faro, before embarking on the challenging world of cruise ships with Royal Caribbean.
During three years experience, he was able to apply all his innate communication skills, and hone his attention to detail and excellence in service. He had multiple food and beverage service experiences in hotels, several hoteis, as Monte da Quinta, Hotel Faro, among others, where he always tried to have contact with the various “terroirs” of the world of wines, enhancing her training in the area of Wines service and wine knowledge.
He learn and increase skills in the area of recruitment and selection for the hotel industry in the company Talenter, later joining the Conrad Hotel as a waiter, room service, in 2017.
After that he joined the project of the Michelin starred Gusto restaurant that he knew that the concept of “fine dining” was where he wanted to be.
Today he leads the team at “A Ver Tavira” fine dining restaurant, where he expertly shares all his knowledge and improves skills. Creating a space of unique experiences and surprising everyone who visits us will always be his main focus.

Agostinho Gomes was born in Funchal, Madeira on the 21st of February where he remained for most of his education. He has had a calling for the visual arts and adventure from an early age, which led him to choose the Algarve to pursue a degree in Communication Design.
As a result of his contact with the people, lands and tastes of the Algarve, he gained a special taste for gastronomy, especially the more experimental and innovative aspects of it.
He pursued a course in Kitchen Management & Production at the Algarve School of Hospitality & Tourism, returning to Madeira for an internship at GreenValley in the Hotel Quinta da Serra in Câmara de Lobos, with the signature of Yves Gautier and the first 5 star hotel in the country with a biological certification, where he created his foundations in international cuisine and BIO.
Upon completing his course at the Hospitality College, he fell in love with Tavira and decided to move there.
He began as a Line Cook in 2017 at the Restaurant “A Ver Tavira” and in the last few years has improved on his technical skills and knowledge, becoming more creative and contemporary with his cuisine by applying his creative and artistic vein.
He is currently Sous Chef and Pastry Chef at Restaurant “A Ver Tavira”. 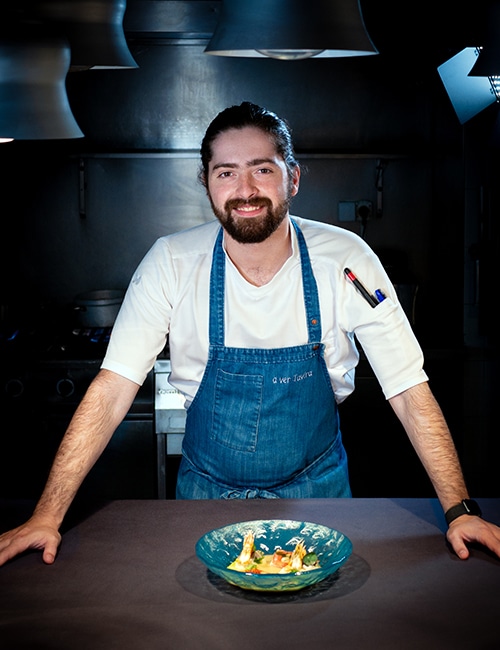 Francisco Avalada was born in Lisbon on the 19th of February, 1996. A great part of his education took place at Alcochete, but the crowning of his high school education was at Alvaiázere, where he transferred from high school into the professional course of Kitchen Technician at the Technological & Professional College of Sicó, with an internship at the Marques restaurant.
His taste for gastronomy grew stronger as his boyhood dreams diminished, such as those linked to aircrafts stemming from his father’s profession. He went on to study at the Algarve School of Hospitality & Tourism and upon graduating started a journey of internships, which has allowed him to continue to learn in a continuous demand to do more and better. These internships took place at the Alfoz Restaurant, the Pestana Carlton Madeira, the Le Rendez Vous Restaurant in Vilamoura and the L’AND Vineyards in Montemor-o-Novo.
He settled in the Algarve and is currently a junior Sous Chef at the Restaurant “A Ver Tavira”, where he began as an intern in 2017. His continuous search for excellence demands a daily practice in perfecting his craft and refining his palate.

André Martins was born in Faro on the 8th of February, 1999 and raised in Moncarapacho in the Algarve. He went to school there until his liking for the kitchen was awakened by his roots.
From 2015 to 2017 he went to the Faro School of Hospitality & Tourism, where he graduated with an internship at Cabanas Park, Vila Monte. Following a few enriching professional experiences, where he has always sought his professional growth, he is now a Sauce Chef at Restaurant “A Ver Tavira”.